Yesterday I was speaking with my dear friend and inspiration, Jill Ouikahilo (www.44hearts.org), as we often do, sharing our wonders, our fears, our world as cinema, our marvel at the universe. As we neared the bottoms of our respective tea cups, draining the liquid, along with the living truth that is life, Jill declared that she is claiming her place in consciousness. At first I cracked up, then I realized that I was witnessing her do so in countless and remarkable ways. I asked her what she meant by her statement. Of course, that was a whole trajectory that rocketed us to a myriad of considerations.

I have been watching Cosmos and relishing every moment; not just because I have a mind crush on Dr. Neil deGrasse Tyson but because I watched the original series and am a curious human trying to develop a peace in my heart and mind with being conscious and human in the universe. In fact, my next book, due out in early 2015, is rooted in these questioning moments. Its title indicates my mindset well: Psalter: The Agnostic’s Book of Common Curiosities. 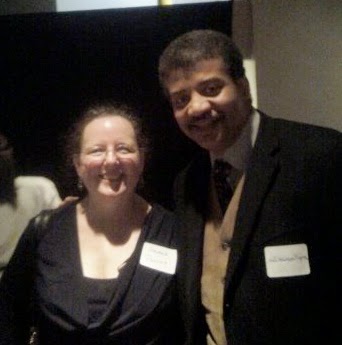 I met Dr. Tyson briefly when he lectured in the Rosamond Gifford Lecture Series in Syracuse a few years back. I already was a fan and felt like a kid meeting a rock star. He was much more welcoming and humorous than I imagined. And he is really tall.
I noticed that he signs books with fountain pens filled with black ink, which he also carries in a leather pen case. Who knew there were pen cases?! He was instantly even more cool. I commented that the case was terrific. I needed one; many of my pens leak often. He asked me how I carry my fountain pens and I said I just throw them in my purse. He responded, “Of course they leak! They are angry.” He was right. I bought a case of my own. I remember him every time I pull a pen out from its little berth.
That was only one small slice of wisdom I have received from Dr. Tyson that has impressed me to the point of change or awareness. I can listen for hours and be informed, amused, and amazed. My capacity to understand science is greater because the way that he communicates knowledge is attainable and enthusiastic. I grew up with a scientist father and we spoke different languages. Our common language was love but the others were worlds apart: poetry, science, God, golf.

Watching Cosmos this time around, I feel more equipped; however, the other evening, Dr. Tyson held a small blue globe between his fingers as he asked if we could imagine that everything in the universe was once contained in that small a space. I responded out loud, “NO! I can‘t imagine…”

This stage of my life is so marvelous. I used to be phobic of the universe. The vast, inexplicable place and purpose were frightening. Now I do not seek answers and am amused that so many people do. The universe is one spectacular Zen koan, a star-filled question with no real answers. And by some miracle, we are in the consciousness field, able to notice and speculate, quantify the quandary.

I have learned from Dr. Tyson that the universe is mostly space, emptiness, with a lot of light, some sound, and a relatively small amount of matter. I have been taught that by the very laws of physics, everything that I see has already happened by the time my brain receives and interprets the reflected light of objects laying in the path of my complex eye. I have learned that I am cousins with the first stars and, because of this, I have always been destined to be a poet and share my stardust.

I believe in many things and one of them is that we have evolved into an extreme state of complication but how magnificent it all is: the smallest atom, the molecules that agree to be identifiable as table or heart, ocean or moon. I think the heart of a poet is deeply imbedded in the daily expressions of this scientist I admire.

Now, to find a way to sit with him and listen, respond, marvel, and wonder. A girl can dream, right?