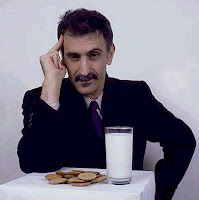 p.s. Thanks Dweezel! You carry the torch really well and you have put together a great band. I was outside of time and space, at least most of the time. Frank is dead. Long live Frank.
Thanks again for following my blog. I appreciate your consideration of my words and thoughts.

1 thought on “Rock & Roll: Making an Argument for the Value of Performances in Schools”