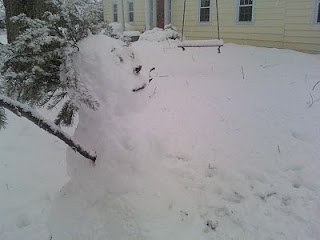 Last week, after 2 days of my start with middle school students, encounters with the demons that plague classes with substitutes because the teachers are out, wondering why I even do this work, the snows hit. The storm of all storms for the Northeast. It was unlike any winter storm in 30 years for New York, New Jersey, parts of Pennsylvania, all places not as equipped as Central New York in dealing with the repercussions. It was also that heavy snow that is more water than ice, causing much damage.

Wednesday morning was certainly a snow day. I relished the fact that I was awake early, coffee in hand, and a day to myself in a home other than mine so I had fewer distractions, or so I thought. I spent a great deal of the day tending the fire. I was all Laura Ingalls Wilder in my brain. I had my knitting, a number of books, my journal, and then there was the artful act of observing the snow globe world through the window.
Thursday morning the weather seemed just as ominous but my computer did not show a closing on the school web site. How could this be?! It was horrid outside. Then I realized that my page was not loading properly…magically the red font of a weather emergency displayed itself as the connection was made to the greater world. Day 2 and this one, I slipped back into bed for a nap. What luxury. And the day of fire tending would rest before me once I rose. I settled into a lovely peace.
Thursday night I thought I would be able to take a train from Poughkeepsie to NYC on Friday morning to attend one of the last of the Association of Teaching Artists board meetings of my waning term of service. Most of my colleagues had made it safely into the city from their homes and since I would not be in the classroom, as I had anticipated, I was delighted that I would be able to attend after all.
But that notion was put to rest by an unplowed driveway and a plow guy with a broken plow, coupled with the dreadful weight of that wet heaviness that was deeper than the hubcaps of my little car that I often describe as Shaquille O’Neal’s rollerskate.
My friend Lani, with whom I was staying, had cancelled her plans to drive to Boston for the weekend in an act of prudence. Since Saturday marked the celebration of Purim, Lani was going to bake her famous hamatashen and she agreed to teach me.
I love when I get to be student. I watched her mix the dough, stir the ingredients and cook them down for different fillings, then the rolling of the dough, the portioning, the careful press to make the triangles that are the essence of this tradition. I tried the rolling and Lani was patient. I know she had knots in her stomach. It was a good time for her to wash some of the mixing bowls and pans while I made a mess of my first attempt. And when we cut our circles from the sweet thin dough, my little triangles hardly looked like an adult was involved. I felt like a 5-year old again but I also saw the benefit of experience.
The house filled with the perfumes of cookies baking, coffee in the pot, and fires at both ends of the house. There was music. Lani told me of her joy in walking through the halls where she works delivering the pastries to friends and colleagues. She shared the Purim story with me. And we sampled all the flavors. Yummy they were.
The universe made the decisions for us. We needed more to stay put than to wander out. In the afternoon, we went out to play in the snow for a little while, as well as survey the damage to the trees from the weight of the precipitation. Lani declared that she had never made a snow man as she packed a snowball. She is from Los Angeles. Snow men are not part of the culture. Since I have not made a snow man since I was approximately 9 or 10, of course we had to put ourselves to the task.
We giggled like kindergarteners. We rolled and patted our “snow chick” because it was obvious that she had a gender. We made her beautiful, a talisman to the day of peace and grounding. She has already melted but we took pictures so she is immortal. Lani made snow angels but the snow was deep and she needed to be pulled out. I was full of laughter.
When I returned to school on Monday, it had been 5 days since I had seen the teachers and students. Many of the kids had shoveled for cash and were proud of their industry. I think in an odd way, many of them were ready to be back in school, back in their routines. My routine and process was back in place as well, although I had to regroup five different groups of students and bring all of the brainstorming to the forefront. But I was rested and optimistic.
Three days later, I got in my car to drive home for 4 days in my own space. I did banking,  paid bills, took my car in for well-overdue maintenance, had brunch with my friend Jennifer, watered my plants. I read a month’s worth of posts on my friend Jill’s blog, as well as entries in Linda’s. I made bread in the bread machine as soon as I got home. I realize now that I need much more respite than I used to require. Perhaps that is where inspiration resides. Maybe that is the cave where the poems rest. And that is where I center and remember who I really am.
Thanks again for following my blog. I appreciate your consideration of my words and thoughts.